On the latest episode of Project Runway (aired 9/20), the designers were forced to design costumes for the Radio City Rockettes.  In my opinion, this type of challenge is intended to test the strongest designers and change up the game, so the winners and losers won’t be predictable and viewers will be on their toes.  The designer who can put together a glorious evening gown or an adorable a-line 1950’s frock, cannot necessarily design a costume well.  Good taste often equals subtelty, or a sense of when to show restraint.  A costume showcases a lack of restraint (and in some ways, a lack of taste), but it still has to be beautiful or interesting; otherwise people won’t care to look at it.  Think Bob Mackie, circa 1970s and 1980s.  His dresses weren’t tasteful in any way but they were lovely to look at.  They were costumes more than gowns.  For example, Cher in a Bob Mackie creation:

Anyway, Episode 10 begins with the designers being taken to Radio City Music Hall, where they watch the Rockettes dance on stage.  Heidi Klum can’t resist the opportunity to slap on a skimpy costume and get in line with the Rockettes (I imagine she’s kicking those long legs at Seal!) and Dmitry seems most impressed by her gams, commenting on how great she looks in her sparkly green outfit (she does look awesome, of course, but when doesn’t she?).

She has a little Tyra Banks in her, as far as liking to be the center of attention.  Hence, the short dresses, ultra high heels, etc.

After the designers learn they have to create a Rockettes costume, they head over to Mood for fabric.  Some designers struggle to find fabric (Elena, Sonjia) while others are overly confident with their choices (Ven, mostly).

The designing begins, and things go downhill very quickly.   Almost all the designers put together obvious, ugly, uninteresting costumes.  Elena uses shocking blue and yellow, while Sonjia uses feathers.  Ven chooses a neutral fabric and refuses to do anything beyond cut it into a short dress.  He is too subtle, too restrained, and is handicapped in this challenge.

The only people who flourish and head in a positive direction are Christopher and Dmitry.  Christopher designs a dress with the New York City skyline.  Obvious, literal, not subtle, and damn beautiful!  Dmitry creates a midnight blue, one-shouldered costume, that is visually arresting, sparkly and magical like a night sky.

At judging, Sonjia’s garment “looks like a turkey.”  Elena’s “is tacky.”  Christopher’s is “inspiring.”  Dmitry’s is “gorgeous.”  Ven’s is “boring.”

Christopher wins (he should have) and Ven goes home (he shouldn’t have).  Let me say this unequivocally: Elena should have been sent packing.  Her garment was absolutely hideous, a sparkly nightmare.  The judges seemed shocked by how bad it was.  She also has not created one truly inspired garment the whole season, in my opinion.  I think they’re keeping her on because she creates drama and is cray cray.  I have not always supported Ven, but he is too talented to go home at this stage in the competition, especially since Elena is still around. 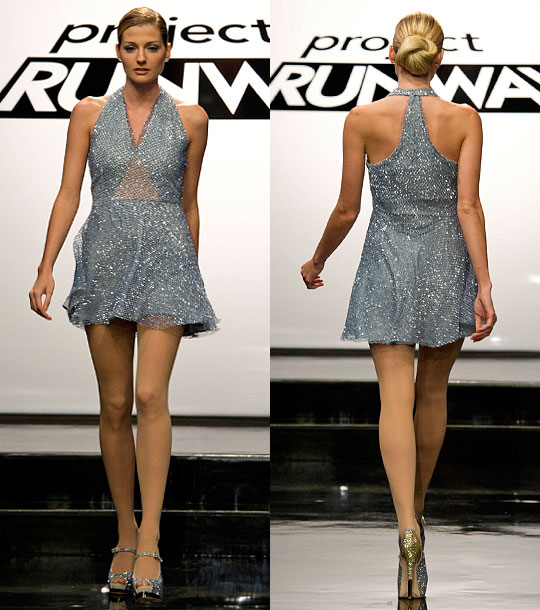 Christopher’s garment (and the challenge winner):

Analyzing reality TV, and the world, at the same time

Your #1 source for all the best gossip

Cats In Your Pants

A blog about nothing, dedicated to no one.

An ethics commentary blog on current events and issues

Calling Shenanigans on the Ladies of Bravo

It Seemed Like A Good Idea at the Time

Two Winey Bitches: Put a cork in it.

We watch. We drink. We dish.

It's a cheaper habit.

I have cerebral palsy I got interested in doing artwork as a way to cope with having cerebral palsy Life is my inspiration for my artwork, roses are too, and the Bahamas

: Your cheat-sheet for celeb news and pop-culture obsessions.

A year of reading the world

A books, movies, and more blog from the staff at the Carnegie Library of Pittsburgh - Main.